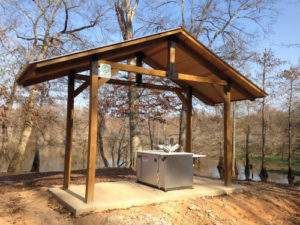 The fish-cleaning station, partially funded by a Sportfish Restoration grant through the Mississippi Department of Wildlife, Fisheries and Parks, includes a grinding device that pulverizes left over fish parts so they can be disposed of through the Park's sewer system. 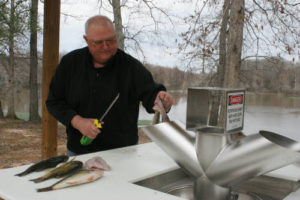 There is no charge for using the cleaning station, which includes a concrete pad, a roof, power hook-ups for electric knives, a four-sided cleaning area with plastic countertops and hoses for a quick clean up.

At the heart of the station is a sink and grinding device. Two open-ended pipes extend above the guarded grinder. Any leftover parts of the fish from the cleaning process, including heads and backbones, can be placed in the pipes and will be pulverized.

While the power to the grinder is engaged, water enters the device automatically to assist in the process. Hoses are available for cleanup of the cleaning tops and knives.

A mix of fishermen, boaters, hunters and campers with a stake in the upper river area of Barnett Reservoir, the Upriver Advisory Committee is in its third year of working with PRVWSD board and staff. The alliance has been successful on several fronts, including new policies regarding camping and hunting, as well as addressing boating and safety issues.

By Heather Augustyn from Chicago Post-Tribune

Marina is one of 5 to be honored

An effort to keep Lake Michigan and surrounding areas friendly to the environment by a Portage marina has earned it a state honor.

Marina Shores Marina has been named a "clean marina" by the Indiana Department of Environmental Management because of its water protection efforts and protection of aquatic habitats.

Marina Shores, a 255-boat marina located at Dune Harbor in Portage, is the fifth such marina to receive this designation from IDEM in conjunction with the Indiana Department of Natural Resources Lake Michigan Coastal Program, which began in May 2008.

Dorreen Carey, special projects manager with the Lake Michigan Coastal Program, said the designation means the marina as well as boaters are making efforts to keep pollutants out of the water.

She said they use a guidebook with more than 60 measures designed to keep the marina and water in the area clean.

"There are things that if not handled properly can pollute a marina, like petroleum, pathogens, on-board sewage, even pet waste from around the area could be a problem, so making sure the boaters understand these issues and the marina does maintenance work is important," she said.

In addition to the pollutants, additional problems can occur when boaters clean their boats with solvents that run into the water and when they clean their fish, Carey said, but Marina Shores has educated their boaters with fact sheets and installed measures to limit that contamination.

"Marina Shores put in a state-of-the-art fish-cleaning station so the waste doesn't contaminate the water," she said.

"He is the one who really takes the responsibility for the marina, to get it certified, but all of the sponsors of the marina commit to keep it going," she said.

Praxl said the effort comes after years of work.

"It's just trying to be as environmentally friendly as we can. It has been a couple of years that we've been working toward this status, and so it has happened slowly, but this year we made it," he said.

Getting the word out has been critical, as has installing new resources to make it easy to be green.

"Everybody wants to do it and maybe they just need a little push," Praxl said. "We have recycling bins at the end of docks now — that makes it easier — and the fish-cleaning station has helped immensely. Before, we were putting everything in the garbage, and it was smelly and wasteful. But now it is really beautiful and helps to keep everything clean."

"We make every effort every day to make sure all of our facilities are clean, and we pay a lot of attention to making sure everything is what I like to call 'Disneyland clean,' " he said. "That's what makes people want to come here."

Other marinas to earn the designation include Hammond Marina, Portage Public Marina, and Sprague Point and Washington Park in Michigan City.

Carey said the designation benefits everyone.

Heather Augustyn is a freelance reporter for the Post-Tribune.
Copyright © 2017, Post-Tribune
Article courtesy of Marina Shores 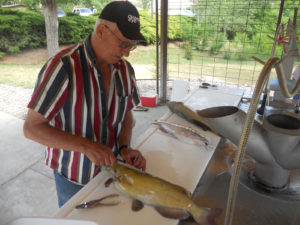 This angler was one of the first to fillet his fish and dispose of the carcass in the new grinder.

Why does a state park need a fish grinder with this power? Because Brownlee Reservoir catfish have thick, tough skin and large bones. That created a nightmare maintenance problem for the old grinder. It worked on the same principle as a garbage disposal: spinning blades that would bind, bend and break. This grinder has teeth that mesh, a better design for heavy-duty grinding and a low-maintenance but effective way to take care of fish remains.

Park staff and anglers are thrilled with how this grinder performs, and everyone keeps their hands clear!